You may have heard this saying at least once in your life: drink at least eight glasses of water each day to stay healthy and hydrated. You may have seen this on a poster in a health center, or you may have even seen it at the bottom of a modified food pyramid in a clinic. While this could apply to some people who have active non-desk-based jobs or larger people who work out more often, the rule of eight glasses isn’t a rule of thumb for everyone.

In fact, forcing people to continue drinking even when they’re not thirsty may be harming them.

A research organization in 1945 claimed that a person should consume a milliliter of water for every calorie of food they consume. And since people eat an average of 2,000 calories a day, this amounted to around two liters of water each day, or eight 8-ounce glasses. Following this, Dr. Fredrick Stare co-authored a book in 1974 stating that people drink six to eight glasses a day.

In both instances, however, both researchespoint out that this amount also includes the water intake in fruits, vegetables, and water-based beverages we consume. However, this last part was eventually left out and forgotten and what was left is the popular “eight glasses a day” we’ve come to accept without question.

Studies, research, and surveys found that there is no scientific evidence saying it is necessary to drink eight glasses of water. While there may be some instances where people need to drink more water (e.g. when they sweat more or have a disease that causes them to be dehydrated more often), it’s not necessary to consume that much water throughout the day.

According to exercise physiologist Dr. Tamara Hew-Butler, people don’t need to keep drinking excessive amounts of water. You’re drinking enough water when you drink when you feel thirsty. Any more than this is fine, but there are accounts and instances when people overdo it and fill themselves up with water.

In reality, extreme cases of dehydration are extremely rare, and only in sickness or cases when people don’t have access to clean drinking water. According to Hew-Butler, as long as you drink water when you’re thirsty, you’re unlikely to die from dehydration even if you don’t drink eight glasses a day.

You don’t have to be drinking eight glasses a day to stay hydrated but refusing to drink water even when you feel thirsty can result in dehydration. Staying hydrated can offer you many benefits, including:

While these benefits will be useful in achieving better health, drinking excessive amounts of water isn’t going to double the amount of health benefits you get. In rare but extremely serious cases, you could develop hyponatremia. 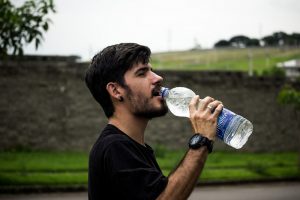 There’s also the risk of exercise associated hyponatremia. When you work out or do activities that require a lot of energy, your body shuts down the need to pee because it knows you will be sweating out a lot of fluid. And since the kidneys can expel around half a liter every hour, your sweat is the only way you are losing fluid.

So, when you drink too much before a workout, you’re trapping too much water that your body is not capable of expelling in a short amount of time. And given the imbalance of water in your blood, you get exercise-associated hyponatremia, which could be a serious condition for athletes.

How Marketing Warped Our Idea of Hydration

That feeling of thirst is our body’s way of warning us that we are hydrated. And as long as we follow that feeling and drink when we’re thirsty, we’re unlikely to get dehydrated. So, why are we so obsessed with staying hydrated and drinking too much fluids? 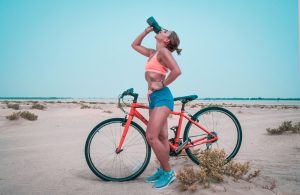 The answer has something to do with decades of marketing, false advertising tactics, and biased research. Energy drinks, sports drinks, and bottled water companies exaggerate the amount of fluid intake people need to create a need to stay hydrated all the time.

As a result, companies such as Gatorade have made it a basic need for athletes and people working out to always drink sports drinks, while those who drink water have to drink more than the necessary amount to stay hydrated. They would claim their statements come from research, however, they funded money to this research, which makes it unfair and obvious that the outcome they want would point to people consuming more of their product.

Decades of these types of advertising have made people more worried about dehydration when, in reality, many people are far from getting dehydrated and are more likely to suffer from hyponatremia than they are to pass out from dehydration.

It’s hard to tell at what point you become hydrated, but you have to look at the symptoms closely to see the dangers of overhydration. Just as the body tells you when you’re starving or full-up, your body can tell when you’re dehydrated or overhydrated.

Signs such as when you drink and you feel nausea, headaches, or disorientation are signs that you are overhydrated. When you’re overhydrated and you have low levels of sodium, you may feel muscle weakness, experience seizures, unconscious periods, or fall into a coma.

It’s dangerous to be dehydrated, but it’s just as dangerous to stay overhydrated. Like food, you have to regulate the amount of water you take to stay healthy. Just like everything in life, take water in moderation; too much and you could be doing more harm to your body than good.