If you’ve watched major sporting events such as swimming or running, you might have seen a bunch of red circles on an athlete’s body part. You might think it’s just a birthmark, a scar, or bodily enhancements, but then you notice it on multiple athletes competing in the Olympics.

These are actually the results of an ancient therapy practice known as cupping. Many athletes swear by the practice, claiming it has helped them relax and improve their recovery after practice and major events. However, despite centuries of practice, scientists claim that there’s no empirical evidence to support its effectiveness, hence the debate on whether or not cupping is helpful for athletes.

What is Cupping and How is it Done?

Cupping is the ancient Chinese practice of placing heated cups on the skin. Instead of acupuncture, which uses needles all over the body, a technician (or the practice can be done on your own) places heat inside a glass, metal, or bronze cup using flammable liquid. 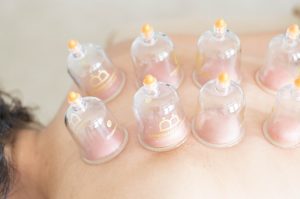 Doing this burns away the oxygen in a cup, creating a vacuum. When placed against the skin, the vacuum causes a suction that sucks up the skin into the cup. Some cupping therapies include making a small incision in the skin. When this happens, the suction becomes very powerful and starts to draw blood out from the ruptured capillaries and out of the skin.

The process lasts for 10-20 minutes before the cups are removed and, if applicable, the blood is cleaned. The cups leave a red circle spot on the body, which disappears after a few days. The circle may be darker if blood was drawn out. According to some practitioners, the darker the circles, the more toxins were drawn out.

This process is supposed to help with blood flow and the energy of the body, or the “qi” or life force, according to Chinese tradition. Cupping is supposed to relieve muscle tension and improve overall blood flow and cell repair. While it’s not meant as a standalone cure-all, people use this to complement their treatment for various ailments.

Why Do Athletes Practice Cupping?

Athletes can attest to the way cupping has helped them recover from training and competing in major sporting events, despite the lack of empirical evidence to suggest its effectiveness. While

Athletes say they are using it to ease aches and pains, and to help with recovery from the physical toil of constant training and competing – although there are no scientifically proven benefits.

While athletes have a lot of available recovery methods to choose from, many continue to opt for cupping. According to U.S. gymnast Alex Naddour, for example, cupping has helped with relaxation over any other costly procedure he’s undergone.

How Effective Is It?

While many athletes, celebrities, and everyday people claim it helps them cope with muscle pain, arthritis, and other conditions, none of these claims have been scientifically proven in the last few centuries. However, while there is no proof of its effectivity, there’s no proof to suggest that it’s harmful for the body either. But it’s difficult to deny that cupping has an effect, since it’s been practiced for over 3,000 years.

You’ll find that a lot of athletes that undergo rigorous training and play in high-intensity sports practice cupping. This practice is also popular with celebrities, who have been photographed with cupping marks. If you see someone with red circles along their body, it’s most likely they have undergone the cupping process.

While you’ll find cupping services available in massage parlors, spas, and traditional Chinese medicine shops, people can practice cupping on their own. They can perform it the traditional way with glass cups and heat, but suction machines can also be a faster method.

Is There Pain Involved?

The British Acupuncture Council says it’s not supposed to be painful, even during wet cupping when blood is involved. However, you can feel a bit of discomfort with the tightness, pressure, and heat radiating from the cup. Imagine someone is pinching a large part of your skin – and then multiply if by around five more cups.

The good part though is that if you’ve seen what cupping looks like, it’s actually less painful than it looks. The sight of skin making its way into small cups is alarming and looks painful for people who’ve never tried it, but it becomes a relaxing, massaging feeling for people who are used to getting cupping treatments to relieve pain.

Generally, cupping doesn’t treat conditions, but it helps with chronic pain such as back pain and headaches, pain often the result of overworking one’s muscles. Cupping focuses on musculoskeletal pain and how one carries them.

Contrary to popular belief though, cupping doesn’t really do much to detoxifying, or removing toxins that supposedly causes an unhealthy body. According to integrative medicine practitioner, Dr. Chiti Parikh, it focuses more on chronic stress and reducing inflammation.

Inflammation occurs when a body is injured or infected, and is the blood cells’ reaction to trying to heal the body. This may make a certain body part sensitive, red, and a bit painful. While cupping doesn’t cure the cause behind the pain (if an athlete gets strained, for example, cupping doesn’t cure the muscles and make the athlete better after one session), instead, it helps you cope with the pain while you seek medical treatment.

Aside from pain, cupping has also been known to deal with stress and its physical manifestation. It can be combined with other forms of physical therapy such as acupuncture to help with mental stress and anxiety. There is some science behind this: acupuncture releases endorphins while cupping helps with blood flow. Combined, cupping can assist in improving your overall mood.

Despite the lack of scientific evidence to support its effects, a lot of people who have undergone treatment can swear by cupping’s effects. Meant to improve blood flow and reduce pain, it’s an alternative form of treatment you might want to try if you’re looking for a fast but effective massage-like treatment.